To tell the truth, it’s been a long while since X10’s low-cost security system seen any updates. Having owned the original system as well as its more refined RadioShack-branded counterpart I can say that it works pretty reliable. Since it’s a wireless system I know that for most users battery-powered motion and door sensors are cause for concern — batteries require periodic replacement, signal strength degrades over time. But from using X10 security system over the years I can tell that batteries easily last for over a year before needing replacement (provided that you use fresh and good quality stuff – like Duracell Coppertop).

The new SecuriLINK Security System (SC1200) features completely re-designed outer shell with built-in LCD screen that will simplify initial configuration and day-to-day use. It supports up to 32 zones of protection, phone control for remote operation from anywhere in the world, built-in integration with lighting control, and a lighting timer to give your home a lived-in look while you are on vacation. The keypad and backup battery compartment are tamper-resistant. That means when armed and a battery compartment is opened on the console or any of the Door/Window Sensors or Motion Detectors, it will trigger the system immediately.

The SC1200 allows you to call your home phone number and listen in (I’m not sure, though, if that feature will work on phones with answering devices).

The LCD will show clock while the system is idle, so you will have one more clock to worry about when Daylight Saving Time kicks in on March 13th. 🙂

It comes in several pre-packaged configurations from 6 to 19-pieces, ranging in price from $99 to $150 respectively. But if you already own the security modules, you can pick up just the console for under $80. And of course it comes with bright red security decals that you can stick to your windows to send intruders away.

I already ordered the new system and should get it some time this week. After I give it a spin for a couple of weeks I’ll report my findings.

X10 will no longer make powerline-based products for controlling lights, thermostats and other devices 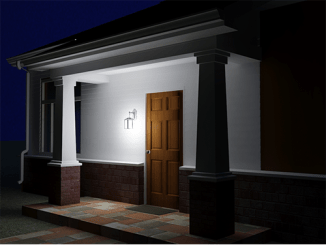